Maine Mendoza Aka Yaya Dub Passed Out During KalyeSerye Manila, Philippines -  Saturday, August 8, 2015 is the most awaited Smash-Arinoli nuptials or famously known as Yakie Nuptials at Kapuso noon time show Eat Bulaga's  Juan for All, All for One portion called KalyeSerye.

For those who are not familiar with the noontime portion, they are doing a skit for almost 3 weeks now and the story revolves around Alden and Yaya Dub's love story or AlDub and Lola Nidora's mission to set them apart. Of course, in every love story, there will be ups and downs. To cut the story short, the antagonist, lola Nidora, arranged an engagement between yaya Dub and Frankie Amoy Arinoli played by Jose.

The wedding was set earlier today but an unfortunate incident happened. Yaya Dub aka Maine Mendoza passed out. On her earlier twitter post, she mentioned about her feeling under the weather. Her love team, Alden Richards, went to the venue to stop the wedding, but unfortunately, he was too late for yaya Dub was rushed to the hospital. The most anticipated meeting of yaya Dub ad Alden did not push through. After the show, he tweeted this message: 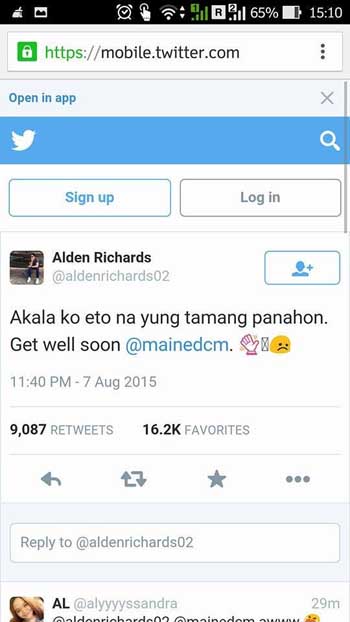 The question now is was it scripted or was it real? If you watched the show, it seemd that the hosts and crews were shocked as Yaya Dub passed out. Real or not, the AlDub fans worldwide are all worried.

As of 5 PM today, Maine Mendoza broke her silence. She posted a picture and a message on her twitter account saying: "Alive and still kicking! As I have posted earlier, I'm feeling under the weather since this morning. We're too busy preparing for the segment that I forgot to take my meds. That's probably the reason why I passed out during our cue. None of it was scripted. I was immediately rushed to the hospital so I can have myself checked. But nothing to worry, they said it's all because of over fatigue. Super appreciate all the love and concern from everyone! Rampa na ulit si Yaya Dub! 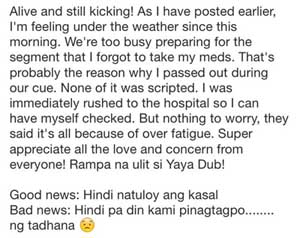 On a post by Eat Bulaga's official Facebook account, they mentioned that Maine Mendoza was rushed to Cardinal Santos Medical Center and is now resting and feeling better. Get wel soon Maine Mendoza aka Yaya Dub, we can't wait for you and Bae Alden to see each other.