Watch as the hosts of Eat Bulaga responded to a 'Closet Gay Dad''s Problem on their Problem Solving segment.

Manila, Philippines - On an episode yesterday, May 27, 2015, aired by Eat Bulaga (GMA Channel 7) on their Problem Solving segment, a proud gay dad confided about his problem. He is proud gay dad with a wife and 3 kids but his family is affected due to gender discrimination. He wants to know what is the best thing to do for him not to draw attention to others that may cause his 3 kids to be bullied and is there something he can do that may avoid his 2 sons to be gay in the future?

Watch as the hosts of Eat Bulaga responded to his problem:

Many people reacted on the hosts' response especially members of LGBT community. On a facebook post from Cha Roque, a Creative Director from Quezon City entitled "An Open Letter to Eat Bulaga from a Lesbian Mom", she expressed her sentiments as a lesbian mother. 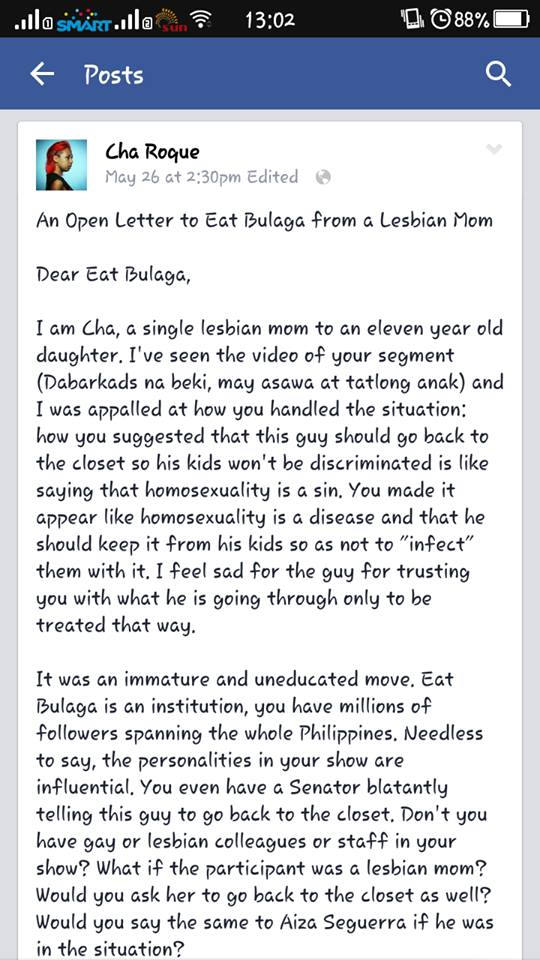 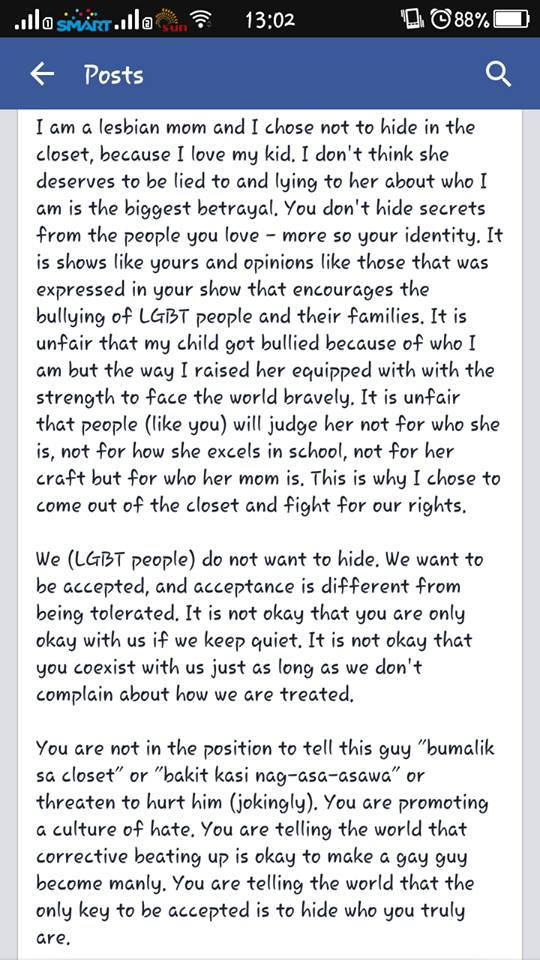 "An Open Letter to Eat Bulaga from a Lesbian Mom
Dear Eat Bulaga,
I am Cha, a single lesbian mom to an eleven year old daughter. I've seen the video of your segment (Dabarkads na beki, may asawa at tatlong anak) and I was appalled at how you handled the situation: how you suggested that this guy should go back to the closet so his kids won't be discriminated is like saying that homosexuality is a sin. You made it appear like homosexuality is a disease and that he should keep it from his kids so as not to "infect" them with it. I feel sad for the guy for trusting you with what he is going through only to be treated that way.
It was an immature and uneducated move. Eat Bulaga is an institution, you have millions of followers spanning the whole Philippines. Needless to say, the personalities in your show are influential. You even have a Senator blatantly telling this guy to go back to the closet. Don't you have gay or lesbian colleagues or staff in your show? What if the participant was a lesbian mom? Would you ask her to go back to the closet as well? Would you say the same to Aiza Seguerra if he was in the situation?
I am a lesbian mom and I chose not to hide in the closet, because I love my kid. I don't think she deserves to be lied to and lying to her about who I am is the biggest betrayal. You don't hide secrets from the people you love - more so your identity. It is shows like yours and opinions like those that was expressed in your show that encourages the bullying of LGBT people and their families. It is unfair that my child got bullied because of who I am but the way I raised her equipped with with the strength to face the world bravely. It is unfair that people (like you) will judge her not for who she is, not for how she excels in school, not for her craft but for who her mom is. This is why I chose to come out of the closet and fight for our rights.
We (LGBT people) do not want to hide. We want to be accepted, and acceptance is different from being tolerated. It is not okay that you are only okay with us if we keep quiet. It is not okay that you coexist with us just as long as we don't complain about how we are treated.
You are not in the position to tell this guy "bumalik sa closet" or "bakit kasi nag-asa-asawa" or threaten to hurt him (jokingly). You are promoting a culture of hate. You are telling the world that corrective beating up is okay to make a gay guy become manly. You are telling the world that the only key to be accepted is to hide who you truly are.
We have the right to our choices. We know who we are and you don't have the right to tell us to be otherwise.
Judging from all the things you said here, I say I better make my child stay away from your show. I feel more secure with my kid hanging out with my gay and lesbian friends. I am more secure that she will get valuable life lessons from them and not learn rubbish. This incident just proved once again how homosexuality is far more clean than Eat Bulaga and its hosts' opinions will ever be."

On the other hand, some YouTube viewers also expressed their thoughts about the issue:

What do you think of this episode?

MODUS: They will run towards you, act like you hit them on t...

When Pinoys put humor in history, this happens