JAPAN - The land of the rising sun, one of the most peaceful place on earth. Famous for its cherry blossoms, you would definitely not miss its spectacular view. But if you failed to visit the Hanami seaon, autumn is just as beautiful as it could be. 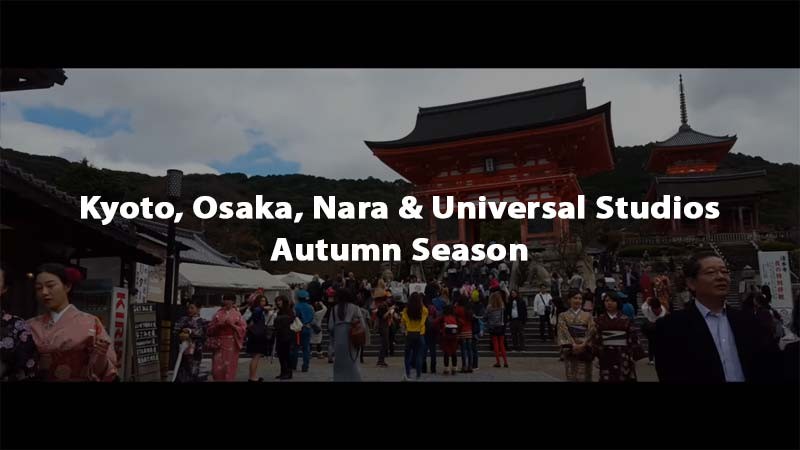 After the crowded Hanami season, autumn will make its way in Japan. Visiting Kyoto, Osaka, Nara and Universal Studios on an autumn season is definitely a must and this video says it all.

If you ever missed out on visiting Japan during the Hanami (cherry blossom) season, do not worry. During autumn it can be just as beautiful. Not only is the weather in November quite pleasing but it is much less crowded than March/April.

Kyoto can be very magical around this time. With autumn leaves red and gold blowing in the wind and reflective streets after a rainfall it really sets the mood. Add to that a high concentration of traditional wooden Machiya merchant houses and geisha's wandering the streets of Gion it really feels like you are transported back to the Tokugawa period.

After we visited the Kinkakuji Golden Pavillion we strolled around in the Arashiyama bamboo forest and ate streetfood at the nishiki market. This is also the place where Aritsugu is located, a famous Japanese knife merchant. They have the finest blades one could wish for in a kitchen and they even carve out your name on it.

We visited the Kiyomizu-dera temple, one of the UNESCO World Heritage sites. The temple is massive, made out of wood and not a single nail used in the entire structure. The view from the wooden veranda was just incredible.

Fushimi Inari Shrine (Fushimi Inari Taisha) is an important Shinto shrine in southern Kyoto. It is famous for its thousands of vermilion torii gates, which straddle a network of trails behind its main buildings. The trails lead into the wooded forest of the sacred Mount Inari, which stands at 233 meters and belongs to the shrine grounds. This place is also famous due to the movie Memoirs of a Geisha, in which the young geisha is wandering through the Torii gates.

Nara-city is known for its deer, which roam around freely. In fact, thousands of deers come down from the hills and temples to visit the city in the daytime, and return once the sun goes down. According to legends, deers in Japan are messengers of the Gods and have become a symbol of the city. The deers are really quite tame and will even respectfully bow to ask for food.

In Osaka, we are once again transported to the future, in which streets are illuminated with neon, bright displays, Jpop music all around, filled with eateries and entertainment. We had one of our best meals in Japan at a tuna Specialized restaurant (Thanks foodblogger Mark Wiens), ordering tuna in various ways, grilled, bowled, raw, seared and minced. So delicious!

At Universal Studios Osaka we got to test ride their latest attraction: Harry Potter! Simply amazing how they recreated Hogwarts, the forest and the entire castle (outside as well as inside).

Department of Health shared a public service reminder about...