MANILA, Philippines - A wedding couple shared their experience to us, Pinoy Secret Files,  wherein a designer failed to deliver the expected gown design. What's even worst, the designer didn't return their payment despite not being able to finish the service.

A bride named Arlene shared her experience to Pinoy Secret Files wherein a designer named RONALD PHILIP BINAY A.K.A. RB BINAY failed to finish the design of her gown and the groom's suit.

July 2015 she was able to talk to RB Binay from wedding suppliers group. Since RB is from Kamuning, she opted to choose him because they are from Quezon City too.

They met with RB Binay in a house with sewing machines located at Kamuning  K2nd St. RB drew samples of what could be the outcome of the design for both her gown and the groom's suit set. The gown reconstruction cost 3,000 pesos while the suit is worth 6,000 pesos. That day, they agreed and immediately paid the down payment. 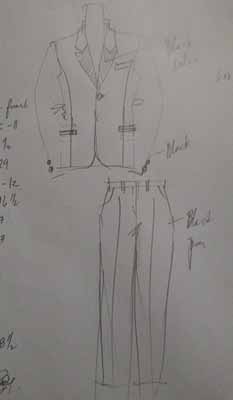 July 17, RB asked for an additional 1,000 pesos to buy more materials which the couple paid via Palawan Express Cash Padala. July 20, he sent the couple a message asking for the full payment in which they agreed to meet on July 20 at Jollibee East Ave near SSS/NSO with a payable amount of 4,000 pesos and later send a balance of 1,000 pesos via Palawan Express Padala on July 25. August 15, the couple check out on RB regarding the gown and he said that he is still working on it.

Then comes the due date, August 20. They tried calling RB but he refuse to answer their calls and message them instead that he will call later because his phone is low on battery. They waited for his call but wasn't able to receive any.

That night, they saw him post a Fashion Show event on his Facebook page that will be held on Villar Sipag Hall. The couple personally visit the said place and even asked the admin office regarding the event but according to them, there is no such event reserved. 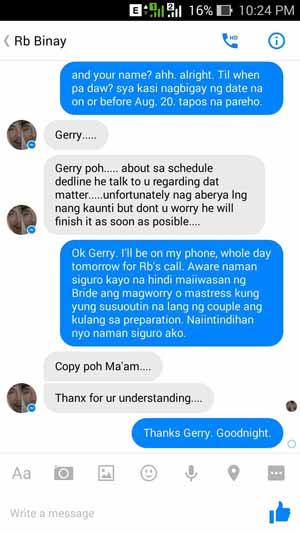 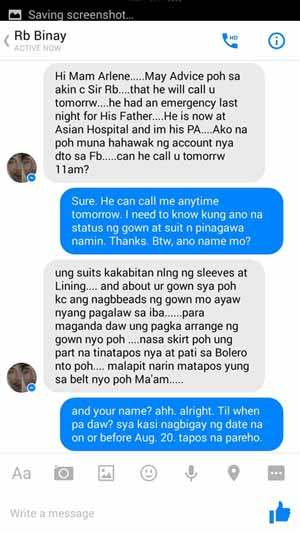 The couple liked all his photos to grab his attention and then a guy named Gerry sent them a message using RB's Facebook account in which according to him, he is the personal assistant (PA) of RB and was just told to post ads on his Facebook wall. Gerry told the couple that RB is arranging personal matters since his father was brought to the hospital.

The following day, August 21, RB called and told them that he will be able to deliver the gown and suit on August 31.

After that, RB never answered their calls and instead give them alibis.

September 7, they waited for RB from 4pm up until 9pm at Kamuning wherein they agreed to meet. No RB showed up. 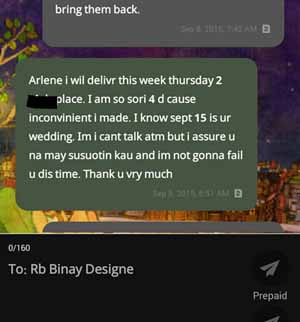 September 8, RB texted the he promise to deliver the gown and suit on September 10 at 8pm. The couple then asked a friend to accompany them on the said date at Las Pinas to personally get the items from RB. Still, no RB showed up.

Come September 11, he promise for the items to be delivered at 6pm.

This time, the couple had enough of his games and decided to go to Las Pinas to get the gown and suit since the wedding will be on September 15 already.

The couple was able to find RB in an apartment at Naga Road. When they were able to talk to RB regarding the gown and suit, he can't present the promised service to the couple.

What's even worst, the gown looks like it was worn by someone else due to the lipstick stains and it being dirty.

3 days before the wedding day, the couple was able to find ways to fixed the salvaged gown and suit.

Sometime in July 2015 I was looking for someone to make my wedding gown. Actually, may gown na ko na binigay sa akin, for reconstruction lang dahil bitin.

I received lots of pm from wedding suppliers group, and I was able to talk to a person named RONALD PHILIP BINAY A.K.A. RB BINAY. Sabi nya may shop sya sa Kamuning. Since im from Q.C., i choose him.

That day he draw a sample of what would be the outcome/design of my gown (3,000 for gown reconstruction since i have my own materials) and also the groom's suit set (worth 6,000). We paid the downpayment immediately that day.

On July 17, he ask for additional 1,000 since he needs to buy more materials pa daw for beads. We send him 1k via Palawan Express Cash Padala. Dahil na rin busy kami sa preparation hindi ako nagkukulit sa kanya. Nagtiwala kami. On July 20 he send me a message asking for the full payment. Assuring us that the gown and suit will we finished on or Before August 20. And.. On July 20, we meet at Jolibee East Ave near SSS/NSO and paid the amount of 4,000 and later send the balance of 1,000 via Palawan Express on July 25. We paid him a total amount of 9,000 within 2weeks without a doubt na baka maloko nya kami. At dahil nga tiwala kami, we gave him the time he need para matapos nya yung gawa nya.. nagfollow up lang ako nun August 15, ang sabi nya his still working on it.

With the story shared to us by Arlene, she warned couples to be wary of the suppliers they talk to and may this serve as a lesson to everyone as well.

As for RB Binay, we at Pinoy Secret Files is open to hear the side of your story. 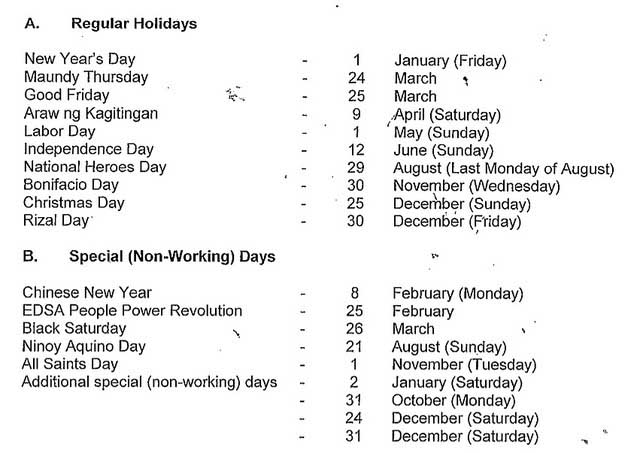