MANILA, Philippines - On a Facebook post by Katrina Jessica Lorenzo, she rants about Cebu Pacific causing delays by suspecting them for having fake E-Visa's but later found out that their visa's are authentic and valid.

Isn't it a protocol for crew members to be knowledgeable, aware and should be able to determine if one's visa is fake or authentic? What are the consequences if a company suspects someone in which turned out to be a false alarm? As a customer, we should be protected too.

My sister and her 7 other co-workers are booked on Flight 5J7944 bound to Dubai. Upon arrival at 12:30nn, her co-workers already tried to check-in their luggages and to our surprise, this Cebu Pacific crew named Norm Usudan told them that their e-visas are all fake due to no passport number indicated. Even up to the point of threatening that when this reaches the immigration, they will get imprisoned or if it's Dubai's immigration, they will get deported. Being naive with the issue, we immediately ask confirmation from the agency who gave them their e-visa and the agency is very willing to settle this because they know that THEIR VISAS ARE AUTHENTIC AND VALID. Via phone call, the agency's operations manager was explaining to Norm that e-visas are now being issued in Dubai and that the agency will provide another copy of the e-visa with the corresponding passport number. Unexpectedly, as they talk, Norm walked out and gave the phone back to my sister's co worker without giving a word. Upon arrival of the e-visa with passport number, we all thought everything was complied and good to go. My sister together with the other 7, checked in their baggages and even got their boarding passes. Suddenly, Mr. Usudan went out of the counter and told the crews that they are again on hold because of fraud. PUTTING THEM ON HOLD FOR THE SECOND TIME WITH THEIR BOARDING PASS BECAUSE AGAIN THEIR E-VISAS ARE FAKE? BUT THEY HAVE PASSPORT NUMBER NOW. ARE YOU SERIOUS? WHY WOULD YOU ISSUE A BOARDING PASS IN THE FIRST PLACE?

First and foremost, Cebu Pacific, would you say that an e-visa is fake because of incomplete details? THERE IS A BIG DIFFERENCE BETWEEN FAKE AND INCOMPLETE, RIGHT? We would understand this if the immigration themselves will tell all the 8 passengers that their e-visas are fake. But this didn't happen, Mr. Usudan just got hold of all the e-visas and went to the immigration and got back to us saying that it is really fake.

Since its becoming doubtful and they are still on hold an hour before the flight, we immediately went to Cebu Pacific's office at 2nd flr and talked to a crew confirming the matter. According to her, they took the call of the immigration that it's negative for them to fly due to fraud.

And so, we accepted the decision and about to go home. But wait, their luggages were already checked in and obviously, they need to get it back. THE MOST IRRITATING PART IS, IT'S ALREADY 4PM AND THE FLIGHT IS AT 4:30PM, WE RAISED THE CONCERN AND NOBODY WAS ATTENDING TO US OR EVEN LOOKING AT US. ARE YOU SERIOUS?! After rejecting their e-visas, now you'll let those bags fly to Dubai WITHOUT A SENSE OF URGENCY! EXPERIENCING THE WORST CUSTOMER SERVICE, I CANT HELP BUT SPEAK OUT. To the point of shouting, I was able to get their attention and questioned what's happening, what should we do, how can we get the bags back and all that. And yes, I made a scene for Cebu Pacific to respond! NORM USUDAN DID NOT EVEN DEFEND HIMSELF. NO WORDS AT ALL.

Mr. Ablas from Cebu Pacific appeared in the picture and checked on the matter. ONLY TO FIGURE OUT LATER ON THAT THEIR E-VISAS ARE REAL. WOW, NOW YOU TAKE IT BACK AND THIS NORM USUDAN SUDDENLY DISAPPEARED!

TO SUM IT ALL UP, I THINK THERE IS A BIG PROBLEM ON YOUR INTERNAL CASCADE OF INFORMATION, CEBU PACIFIC. SISTEMA, PLEASE LANG! DON'T TOLERATE YOUR EMPLOYEES TO CONCLUDE EASILY WITHOUT JUSTIFICATION. SECONDLY, TRAIN YOUR CREWS TO BE PROFESSIONAL. WE ARE CUSTOMERS HERE, WE SHOULDN'T CHASE YOU FOR ANSWERS. FACE US WITH YOUR VALID EXPLANATION AND FROM THERE, MAKE AN ACTION PLAN AND TELL US WHAT TO DO. THIRDLY, SENSE OF URGENCY. WAG LANG PURO DISCOUNTED FLIGHTS, WORK ON YOUR AFTER SALES! WHAT IF WE DID NOT COMPLAIN? THESE 8 PEOPLE WOULD HAVE LOST THEIR OPPORTUNITY THERE BECAUSE OF YOUR NEGLIGENCE AND STUPID CUSTOMER SERVICE.

THIS IS A BIG DISAPPOINTMENT THAT WE WANT TO SHARE TO EVERYBODY.

And to support this complaint, please see attached photo of NORM USUDAN for your reference.

FROM ANOTHER LOST CUSTOMER"

WATCH: Bodybuilder vs Arm Wrestler, who will win? 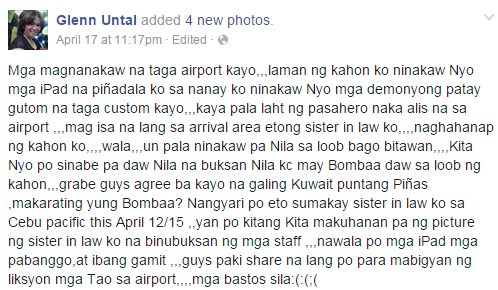 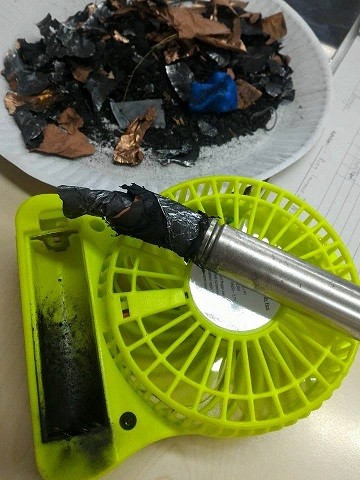