Taiwanese drivers have captured the moment TransAsia flight GE235 crashed into a river near the country's capital city of Taipei today. The footage shows the plane, a turboprop ATR-72, rolling sharply to the left as it descends over a road. TransAsia Airways has confirmed that the plane carried 58 people — five crew and 53 passengers — and that atleast 13 people died in the crash.

Live footage from the scene of the crash shows a number of rescue workers making efforts to extract passengers from the stricken plane, some three hours after the country's aviation authority said the crash took place.

GE235 On the Ground:Dozens of rescue workers on, around and near the aircraft. Unclear if, or how many, inside pic.twitter.com/czc2KpkOb5

Pictures taken by journalist Tim Culpan on location show most of the plane submerged in water, with rescue workers using inflatable boats to reach the fuselage. The Taipei city government has established a disaster response center to deal with the aftermath of the crash.

The BBC reports that rescuers are still trying to retrieve passengers trapped inside the wreckage. "We're asking the public works department for heavy cranes to be deployed, in the hopes that the body of the plane can be lifted up," Wu Jun-Hong, assistant director of Taipei's fire department, told the news broadcaster. "At the moment, we think a lot of the trapped people are in the head of the plane."

Unverified footage of the plane, in which its wing appears to strike a car traveling along the raised expressway, was tweeted by Twitter user Missxoxo168. Pictures attributed to Taiwan's TVBS appear to show a taxi cab on the same stretch of road with extensive damage that could have been caused by collision with the plane's wing.

TVBS: Taxi cab was clipped by #GE235 as it descended into river in Taipei. #Taiwan #TransAsia pic.twitter.com/YuvtTl9xUP

#Update - Death toll has risen to 13 after #TransAsia Airways ATR 72 plane plunged into a river in Taiwan. pic.twitter.com/JhiCqGFGWa

This is the second TransAsia ATR-72 turboprop plane to crash in Taiwan in six months. Last July, 48 people were killed when TransAsia flight 222 crashed in Penghu, off the coast of Taiwan, after it failed to make a second landing during typhoon conditions.

The two fatal crashes are a blow to the Taiwanese aviation industry, which worked to make changes to its safety record after a series of high-profile crashes in the 1990s and 2000s. Prior to July's incident, the last fatal plane crash on the island occurred in May 2002, when a China Airlines 747 broke up in the air during a flight from Taipei to Hong Kong. 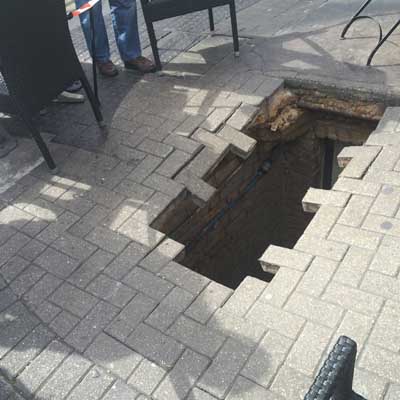