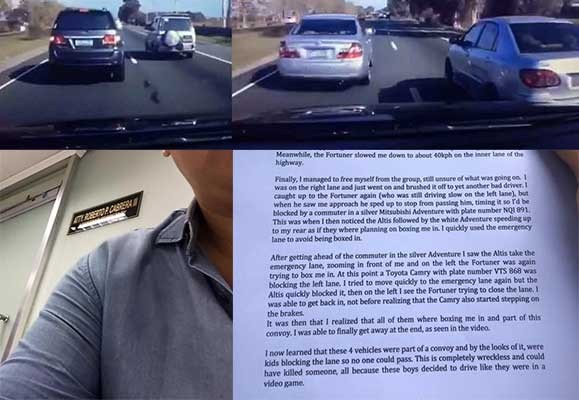 I'm filing this complaint regadring the incident on NLEX last May 15, 2016.

I was travelling down from Subic towards Manila with my family at around 3:55pm when I encountered what I know now, was a convoy.

I was on the inner lane when I notice a bunch of cars switch to my lane going below the speed limit. This happens a lot on NLEX nowadays where people tend to hog the overtaking lane. I moved over to the right lane and passed the first vehicle - a white Mitsubishi Adventure with unclear license plate. I continued agead ahead and passed a Coralla Altis with plate number XTM 124. Every seemd normal until I went back the left lane when in front of me, a Toyota Fortuner with plate number ZDA 383 pressed on the brakes and slowed down to approximately 70 KPH. At first I thought this Fortuner was just another bad driver on the road.

Then, I glanced back and spot the Altis, which was on the inner lane, go right and speed up, coming inches within the right side of my Mazda CX-9, followed by the Adventure. At this point I still had not realized what was happening. The Fortuner then pressed the brakes again while that Altis tried to push me from the right also cmoming within inches of my side mirror. My wife was getting worried wondering what was happening as we had two kids in the car (including a 1year old). Meanwhile, the Fortuner slowed me down to about 40KPH on the inner lane of the hightway.

Finally, I managed to gree myself from the group, still unsure of what was going on. I was on the right lane and just went on and brushed it off to yet another bad driver. I caught up to the Fortuner again (who was still driving slow on the left lane), but when he saw me approach he sped up to stop from passing him, timing it so, Id be blocked by a commuter in a silver Mitsubishi Adventure with plate number NQI 891. Then was when I then noticed the Altis followed by the white Adventure speeding up to my rear as if they where planning on boxing me in. I quickly used the emergency lane to avoid being boxed in.

After getting ahead of the commuter in the silver Adventure I saw the Altis take the emergency lane, zooming in front o me and on the left the Fortuner was again blocking the left lane. I tried to move quickly to the emergency lane again but the Altis quickly blocked it, then on the left I see the Fortuner trying to close the lane. I was able to get back in, not before realizing that the Camry also started stepping on the brakes.

It was then I realized that all of them where boxing me in and part of this convoy. I was able to finally get away at the end, as seen in the video.

I now learned that these 4 vehicles were part of the convoy and by the looks of it, were kids blocking the lane so no one could pass. This is completely wreckless and could have killed someone, all because these boys decided to drive like they were in a video game.

Below is the video wherein these 4 kids are trying to box in another vehicle.