Graphika Manila, A Design Conference To Boost Your Creative Juice

MANILA, Philippines - Looking for design inspirations or something to boost your creativity? Head on to GraphikaManila, a conference on creativity that features the best design creatives around the world.

GraphikaManila (GM) is an annual conference to inspire and boost your creative juice. On 2016, GM will once again let that creativity flow into you as they will have another 2-day conference just like last year when they celebrated their 10th year anniversary.

As a creative myself, I've been attending GM for 5 years already and on 2016 it will be my 6th year. Each year, GM just keeps getting better and better! To prove you that, here's my very first GM conference kit as well as my delegate ID.

For this year's round, GM will feature 12 speakers including local artists as well:

Founded in 1986, Pixar Animation Studios is an American computer animation film studio based in Emeryville, California. Pixar has produced 15 feature films, its first being Toy Story (1995) and the most recent being Inside Out (2015). Other Pixar feature films include Finding Nemo, Cars, Monsters University, Brave and Up. Pixar is represented by animator, Benjamin Su.

North Kingdom is an award-winning experience design company. Through years of innovation and exploration in the digital medium, they've held on to what they feel is important – creative freedom, quality of work and curiosity – always with their feet on the ground and in high spirits. Some of their clients include LEGO, Lucas Film, Disney and Google. North Kingdom is represented by design director, Scott Hiers.

Blind is a multi-disciplinary design studio based in Santa Monica. They have produced award-winning videos that combine design, animation, live action and visual effects. For over 19 years, Blind has worked with Fortune 500 companies to start-ups including Microsoft, Xbox, Nike, Sony Playstation, Mitsubishi Motors, Audi UK, Electronic Arts and artists such as Justin Timberlake and Coldplay. Blind is represented by creative director, Matthew Encina.

Timothy Goodman is a graphic designer, illustrator and an art director from New York City. He runs his own studio, working for clients such as Airbnb, Google and Nike. In 2013, he created a personal project with Jessica Walsh called 40 Days of Dating. The experiment turned blog has received over 10 million unique visitors and have been featured across the world. They co-authored the book, 40 Days of Dating: An Experiment. They recently optioned the film rights of their story to Warner Bros.

Gemma O'Brien is an Australian artist and designer specialising in lettering, illustration and typography. Her typography work takes on a variety of forms, from calligraphic brushwork, illustrated letterforms and digital type to large scale hand-painted murals. She splits her time between advertising commissions, gallery shows, speaking engagements and hosting hand-lettering workshops around the world. Her clients include Adobe, Volcom, Heineken, among others.

Vault49 is an internationally award-winning design studio with a worldwide practice and reputation for creating world-class CGI, illustration, typography, photography and motion graphics. Vault49 works across a variety of materials and media to provide a full complement of design services. Their clients include Coca-Cola, Adidas, Hyundai, Yahoo! and Time Magazine. Vault will be represented by Luke Choice and Richard de Hoxar.

Si Scott is a graphic designer from the UK and has one of the most recognisable styles in the industry. His intricate drawings are best known for their hand drawn quality. He has worked alongside some of the world's most prominent design studios and brands. After finishing a degree on Graphic Design, he started out in London and worked for a number of different small design agencies while continuing with his own work and freelance projects on the side. Si now runs his own studio in Manchester.

Hector has been working in the creative industries for over 20 years. An artist, filmmaker, creative director, storyteller, seeker and curator. He thinks and he makes. What ever the details, all Hector's work is about creating unique experiences. He lives in Barcelona with his partner Nathalie and their greyhound Takka. His biggest luxury is a pair of running shoes.

Valerie Ann Chua is a painter from the Philippines. She has worked as an illustrator for commercial clients in the beauty and fashion industry where her primary subject dealt with the female form, beauty and aesthetic. Her clients include Keds, Clinique, Lenovo, Christian Louboutin (Asia) and SK-II. Some of her works have been featured in Preview Magazine Philippines, JUICE Malaysia, Red Tricycle USA and DPI Magazine Taiwan.

Harvey Tolibao is a Filipino comic book artist. He started working for the comic industry in 2006 and has done works for Dabel Brothers Productions, Top Cow Productions, IDW Publishing, Valiant Comics, Zenescope Entertainment and DC Comics. He is currently the creative director and co-founder of HMT Studios Manila.

TICKET CLAIMS START AT 8AM
Gates open at 9AM.

For 1,800 pesos, Super Early Bird Tickets are applicable to professionals and students. Exclusively available via GM Online Ticket Store & direct bank deposit. Limited to 500 passes only. Will sell out fast! Valid until November 13, 2015 or until supplies last.

WATCH: Moira Dela Torre and I Belong To The Zoo's 'Patawad,... 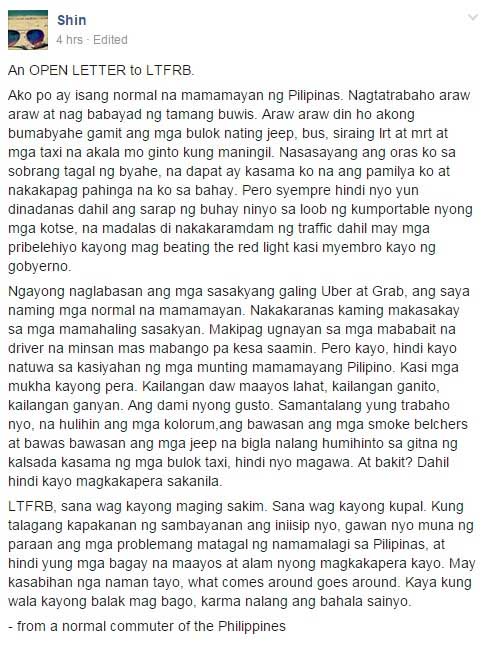 [OPEN LETTER] : Netizen shares his open letter to the LTFRB