An Uber Driver was allegedly unprofessional towards 2 sick passengers. Find out the whole story. 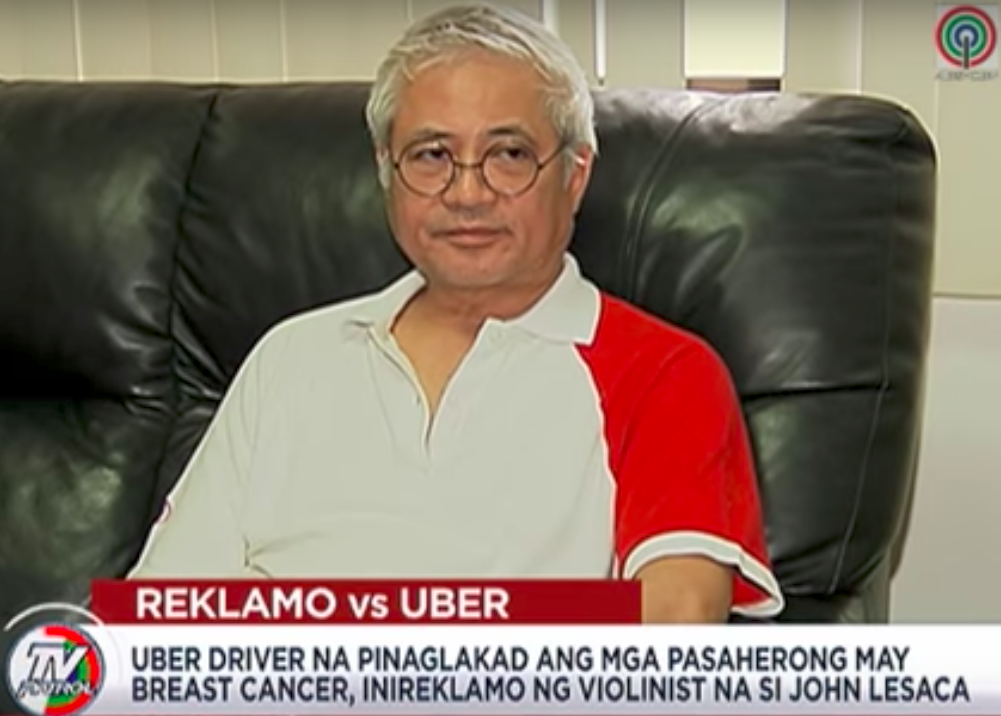 Manila, Philippines - Violin Maestro John Lesaca recently shared on his personal Facebook account a horror story his wife and daughter who are both undergoing treatment for cancer experienced with an Uber Driver.

According to his wife and daughter, a female Uber Driver named Anie Agbayani, was so unprofessional, it caused both of them a lot of stress.

My friends, I usually keep my personal life up close and private. However, as a father, I have to make the following public as it may very well happen to you.
My only daughter and her mother are undergoing treatment for cancer. I try to take them to the hospital for their treatments whenever I can but last Friday I was unable to do so.
Since they cannot drive too much in the very stressful heavy traffic due to their condition, my daughter decided to book an Uber car (Suzuki Swift) from Varsity Hills along Katipunan Avenue this past Friday (June 30) afternoon to go to The Medical City for the last day of radiation treatment for her mother.
Both of them suffered a lot of stress caused by ANIE AGBAYANI, the female driver of the Uber car.
Three counts against UBER and driver ANIE AGBAYANI:
1. She drove dangerously. She ran thru the Abada-Alvero intersection without stopping, kept on changing lanes thru C5 and Ortigas traffic, counter-flowed around the island at Ortigas cor Green Meadows to get ahead of two cars in front of us. She put 2 medical patients’ lives in danger due to her reckless driving.
It made my daughter very dizzy and step on imaginary brakes, and seeing how badly stressed out her mother was due to the bad driving, she tried to calm her mother down and amuse her with other things.
2. ANIE AGBAYANI was unprofessional. She munched on a pack of Mr. Chips and drove with cheese on her fingers, sent audio messages to someone she was corresponding with on her mobile phone, and sang along to Alanis Morisette's album on loop. (Shoutout to those in their 30s who know the lyrics to You Oughta Know.)
3. ANIE AGBAYANI addressed her passengers after crossing the stoplight at Ortigas corner Green Meadows:
“Umm”, she said, “You can get to the hospital faster if you walk”.
Her mother said, “no thank you, we'll stick out the traffic in here”
My well-bred daughter, being a teacher, asked, “is that alright with you”?
“Yup”, the driver replied.
A minute later, ANIE AGBAYANI said, “aaah, coz I live nearby already, and if I take you to Medical City I'll have to go around and it will take me another hour to go home... But if you get down here, it will take me only 20 minutes”.
Both my daughter and her mother were in shock.
“You want us to walk”?
She added, “coz I started at 4 am and my knees are shaking already”.
My daughter and her mother looked at each other.
It was raining and although it was a short uphill walk for healthier people, both she and her mother were not feeling well, especially due to their health condition.
The driver then said, “I'll tell you what. I'll give you a discount nalang. Instead of paying 380, you can just give me 300”.
My daughter gave her 300 and briskly caught up with her mother who stormed out of the car toward the hospital.
They inhaled second hand smoke and emissions from vehicles stuck in traffic. Thankfully, after a short distance to the hospital, the rain weakened to a drizzle.
They arrived at the hospital’s radiation oncology center literally sick, wet, tired, very stressed out and angry.
All Oncologists will declare that stress will always be a contributory factor to cancer, and its possible remission. Getting wet under the rain will surely exacerbate their lowered immune systems as well.
TO THE EXECUTIVES OF THE UBER COMPANY, AND TO THEIR DRIVER ANIE AGBAYANI: CANCER IS A TERRIBLE MEDICAL CONDITION.
I WILL NEVER WISH CANCER ON ANYBODY.
BUT IF THE CONDITION OF MY DAUGHTER AND HER MOTHER WORSENS BECAUSE OF THIEIR TERRIBLE EXPERIENCE WITH YOUR COMPANY AND YOUR DRIVER, I WILL DO EVERYTHING IN MY POWER TO BRING YOU DOWN, SUE THE SKIN OFF YOUR BEHINDS AND HAVE YOUR DRIVER ARRESTED AND PUT IN JAIL.
THIS IS A PROMISE.
AND IF YOU REFUSE TO DO ANYTHING ABOUT THIS INCIDENT, MAY YOU AND YOUR ILK ROT IN HELL.
JOHN LESACA

My friends, I usually keep my personal life up close and private. However, as a father, I have to make the following...

Lesaca family immediately complained directly at the Land Transportation and Franchising Regulatory Board.

WATCH: Taxi driver refuse to give change of passenger caught...